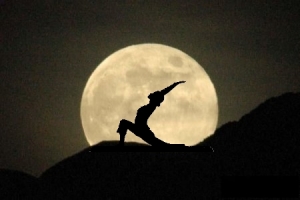 Once every three years or so there is a month with two full moons. The second is known as a blue moon. If you’re reading this on July 31st and you go outside right now, you’ll be standing under one.

Astrologers seem less excited about the second-of-the month aspect of today’s full moon than about the moon being in Aquarius. Breakthroughs in the midst of struggles are predicted. You’d do well to pay attention today.

But perhaps you were not even aware that the moon has just gone full. Why is the lunar cycle even important?

I grew up on the south shore of Long Island, on a skinny street between two canals. It was a poorly crafted street which went downhill as you traveled inland from the bay to its lowest point where the two canals dead-ended. When the moon was full, high tide was very high – so high that the ocean spilled over the bulkheads and flooded the street at that low point. If you needed something from the store, you were just going to have to wait a few hours.

Most of us live too cut off from natural phenomenon like moon tides to feel the consequences of the lunar cycle. But that doesn’t mean we should ignore it. The same gravitational pull that affects the tides draws gently of the water in your body. It changes you, in albeit subtle ways. When we start to pay attention – really pay attention – we become aware of those subtle changes.

Yoga is an excellent tool for building subtle awareness of your body. The practice of Chandra Namaskar, the moon salutation, taps into the cyclical nature of the moon while opening the hips, the seat of the second Chakra. The sacral energy center is the home of water energy. Water is changed by the moon. Do you see where this is going? The circling sequence of Chandra Namaskar itself represents the cycle of lunar transformation, the flow and ebb and flow and ebb that is the constant rhythm of life.

Are you tuned into the lunar cycle? Is it time to start exploring the moon’s ever-changing energy again? I’d love to hear from you. Share your comments below!

Podcast Ep 27: Build Up Strength to Open Your Heart
Podcast Ep 42: Loyalty and Down Dog
What you really need to know before your first yoga class (hint: it's not what to wear)
3 post-run yoga stretches your body will thank you for
Podcast Ep 26: Wildlife Rehabilitation, Shamanism and Yoga
Meditation Cat and Yoga Dog
Podcast Ep 22: No Excuses Chair Yoga Practice
Yoga to Say "Thank You"
0 replies

Want to join the discussion?
Feel free to contribute!